About the Woman's Club of Starke 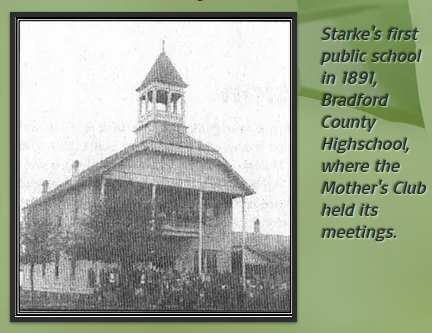 The Woman’s Club of Starke, formerly known as the Mother’s Club, was founded in the late 19th century and held its’ meetings in the Bradford County High School. Their purpose was to assist the Bradford County High School and only mothers were accepted as active members with teachers as honorary members. One of their earliest projects was furnishing a room in the school or a library and a study for the principal. They also provided students with books and clothing and hired a janitor to do maintenance. In 1913, the Mother’s Club reorganized and changed its name to the Woman’s Club of Starke. One year later, after the school relocated to a different site, the Woman’s Club began using the school building as its headquarters. In 1917, with the approach of World War I, the building was turned over to the Red Cross. Club women made hospital blankets, Christmas kits for troops and shipped clothing to allies. In 1921, the Board of Education gave the school building to Woman’s Club at which time it was remodeled. Some of the lumber from the original structure was used in the new construction. The new craftsman/bungalow building opened on November 3, 1922. Projects undertaken in the 1920’s by the Woman’s Club included a drive to remove cows from the streets, development of a city park and municipal suffrage.

The Bradford County Library used portions of the building and in 1936 was the first county library in Florda allowed to borrow books from the State Library in Tallahassee. Throughout World War II, the United Service Organization (USO) used the building as a clubhouse where the Army YMCA entertained soldiers who were stationed at nearby Camp Blanding Joint Training Center. Opening in April 1941 they provided minstrels, radio programs, quiz games, card games, dances and vaudeville shows for the soldiers. Throughout its history, the Clubhouse has continued to serve as the community’s primary facility for social and cultural events. on April 18, 1997, the Clubhouse was listed on the National Register of Historic Places and continues to serve as the Woman’s Club of Starke headquarters. 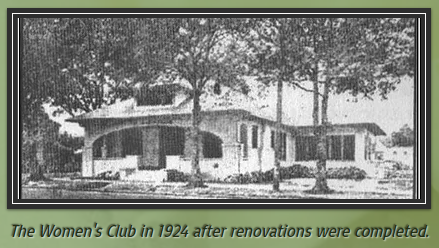 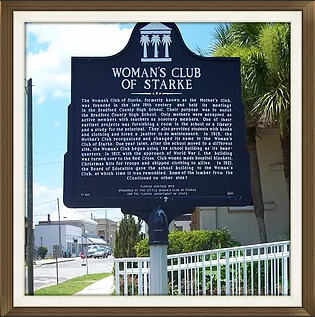